Well we survived the show and moving up to the Low Amateur Owner Jumpers.  We are a little banged up.  A little frustrated.  A little wiser. 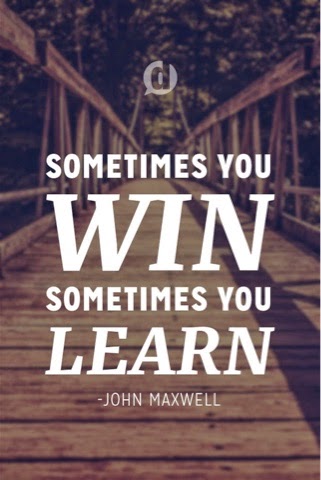 We started out Friday with using the 1.15m as our warm up.  It was a combined $500 1.15 or 1.20m class.  I didn't want to start at the 1.20 yet and chose the 1.15 to get in the ring after a month off from showing.
Poppy was perfect.  The first round 80 second time allowed was tight and even as fast as she is we finished just under that.  Many did not.  In the jump off I practiced my speed and tightening up my turns.  We ended up winning the class and I was thrilled.  It felt like a great way to set the tone for moving up on Saturday. 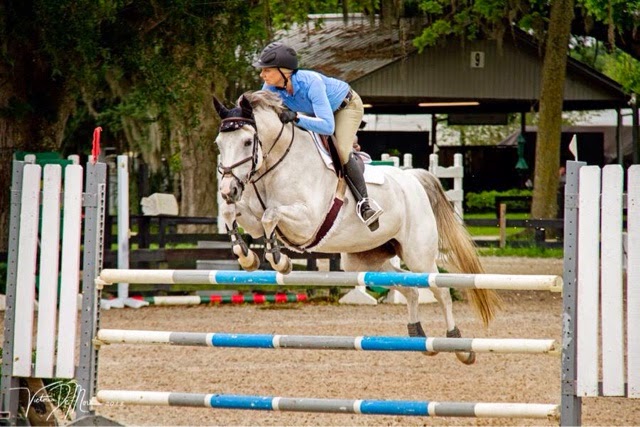 Saturday I entered the Low Amateur Owner Jumpers which were set at 1.20m.  I don't have the course for that because after I walked the course they changed it and I had to learn my new course standing at the in gate.  It was a power and speed class (table IIc).  I felt ready.  She jumped the power phase beautifully. The first jump of the speed phase was a liverpool.  Apparently we don't jump liverpools anymore and she said hell no complete with rearing.  2 refusals and we were excused.  I had to get her around.  There was a 1.10m class later so we entered that.  Trainer got me a bigger whip and we practiced in the warm up ring with a cooler under an oxer.  Poppy turned into the fire breathing dragon.  Rearing, leaping, etc.  My apologies to those I about ran over as she ran around out of control in the warm up ring.  I emphasized the point to her that refusing was not allowed and we went in the 1.10m. She stopped again.  Second try I gave her the option of over or through and she smartly chose over and we finished the course.  We have been jumping liverpools for a couple of years now.  This was not ok.  Poppy and I went back to the barn both exhausted and frustrated.  In all her antics she also stepped on her heel and cut it open.  I doctored that, cleaned her up, and went back to the drawing board.  She also barely touched her dinner that night. 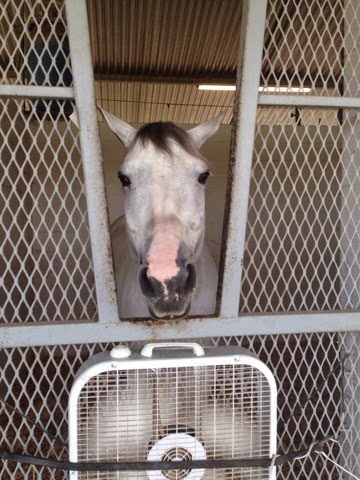 Trainer and I concluded that she is being her difficult self.  We had these issues when we first moved up to the Adult Jumpers.  I have to not trust her and over ride.  There was no way I was going to do the Classic Sunday at 1.25m.  Thankfully they added a 1.15m class and I did that. 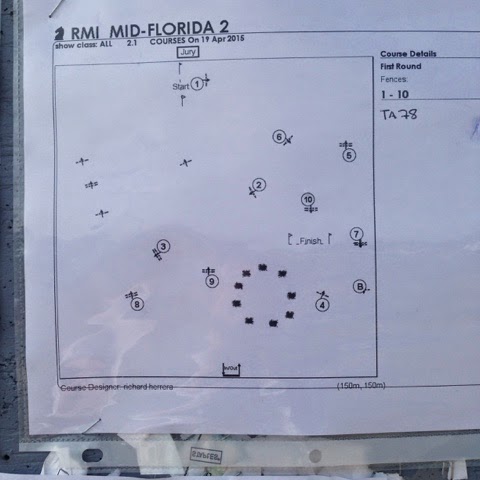 Again she stopped out at the liverpool.  I didn't want to try again and trainer didn't give me the option.  This show does red/blue rounds so I could go back in for that.  Again out to the warm up ring to emphasize no stopping.  Over or through.  We went in and I let her know I was pissed.  Spurs in her side and off we went.  The line with the Liverpool was a 6 stride.  We did 5.  I rode hard to every fucking jump.  We finished clear.  We felt defeated but we finished.
Back at the barn she wouldn't eat her treats and also didn't finish breakfast.  We are off our game but we will fix this.  The height was not an issue for her.  She is scopey and 1.20m is easy for her.  I will work on building her confidence though so she believes that.  She feels great but I will also have my vet check her and make sure she isn't sore anywhere and need some maintenance.  We will work through this.
Posted by Amy @ Diary of a Horse Obsessed Girl at 10:13 AM