This post has been waiting to be finished since September.  I was going to tell you all about my amazing show with Poppy after a 4 month hiatus.  I was excited.  I had exciting news to share.  Then in typical fashion by my ex was sure to sabotage it.  I won't go into the detail of what he did.  I don't want this post to be about him (he doesn't deserve that). I simply wanted to explain why I have been silent.  It has been a whirlwind and I have learned some valuable lessons.  Most importantly when the going gets rough, you learn who your true friends are... I have also had to change trainers to add to this complete cluster f@#$.  It has taken me awhile to gather myself (again) but no matter what, I will not be broken.  So here goes.  Here is the 2 month old post that you should have been reading back in September...

The last 2 days before the horse show Mother Nature did not cooperate and my riding was rained out.  Normally this would have freaked me out but with all of the other shit going on in my life I just said "whatever."  I was going to the show no matter what.  Whether we jumped .95m or 1.15m, we were going.  I spent the night before packing the trailer.  What normally is something I can do in my sleep I felt rusty at.  I had to go through the list of what I needed (and yes I forgot stuff).  I was also proud of myself for airing up my truck and trailer tires myself and greasing the bearings on the trailer.  I can do this I told myself over and over (just in case I also went online and got a membership to USARider too).

Of course I left late for the show Thursday morning.  When I got there I literally grabbed everything off the trailer as fast as possible and tacked up.  We started in the 1m.  I didn't get to walk the course and learned it standing at the in gate.  Since we were having trouble with liverpools I brought a blue tarp with me to school.  As soon as trainer made the tarp wide and the jump bigger Poppy exited left. Twice.  There would be no third time.  In fact I was driving so hard over that jump I got the end of the whip caught up in my very sentimental diamond horse shoe necklace and I felt it break as we landed.  Heartbroken.  I knew I would never find it in the muddy ring.  As I brought her down to the walk I felt the necklace fall from my neck and I was able to catch it.  That had to be a good omen!

We went into the 1m and the liver pool was an option jump.  Of course we opted for it.  I got her over it and then she refused the next jump.  We finished the course with 4 faults for the refusal and a bunch of time faults.  Next was the 1.10m so I decided to go for it and make her get around.  This time she stopped at the liverpool.  Second try I drove her hard (chair in the air and all) and made it over. 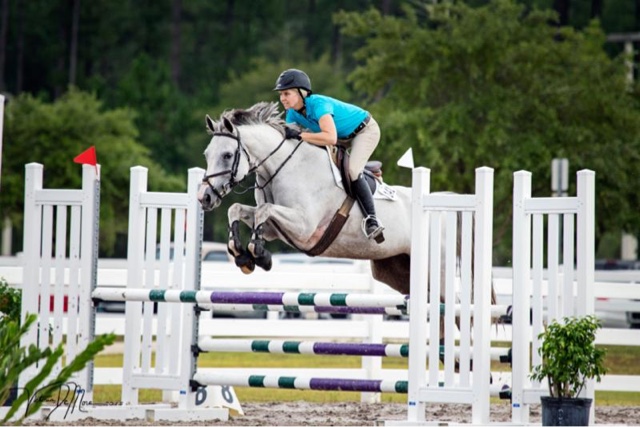 I then spent the rest of the day contemplating what to do Friday.  Friday was the Finals for my division.  It would be 1.15m and inside the coliseum.  The size of the jumps weren't the issue.  We were both rusty and I needed to ride strong and decisively.  There was a 1.10m class I could use as a practice before the finals so I decided to go for it.

The day of finals my practice class didn't go until late afternoon and there were 80ish trips in the 1.10m.  It was never ending.  This show hosts the Regional Maclay class so all of those riders used the 1.10m class the practice.  The amound of time faults were crazy, hence the never ending class.  I went 60th in the order.  There was no liverpool unfortunately.  It was not my best ride but we jumped every jump and just had one rail. I felt okay to try the finals class.  I knew I was going to have to ride strong and box her up.  Running at the jumps wasn't going to guarantee she would jump, I needed her between me, contact on the reins, and keeping her in that box.  Over, under, or through.  I was first in the order of go.  The children's finals went first so I got to take her back to the barn and watch a couple rounds.  Only 3 went clear in their class so that tells you it was a challenging course.  It was set at 1.15m with some large wide oxers.  Jump #10 was one of those large wide oxers with a liver pool under it.  It had a long approach so plenty of ground space for me to screw up.
I ate the first jump.  Bad.  This alerted me that I needed pace.  We were not boxy.  I had walked 5 to 6ab in a long 8 so I opted for a whoa 9.  I whoed too much and got there long so she pulled the rail.  She was a little looky and sticky though the one stride on the rail but jumped it.  I rode stong to the liver pool and she jumped it amazing!  We finished with 4 jumping faults and 1 time fault.  I was 1/10 over the time allowed.  I knew we likely wouldn't ribbon with that round but I felt fantastic as we has a good solid ride.  A huge improvement from the previous day!  Trainer felt the same.  After we processed the course she said to stick around and see if I got something.  They annouced the results and I couldn't really hear.  Again I thought I got nothing.  Then someone told me I won.  I was in complete disbelief!  No one had gone clear and I had the least amount of faults!  We won!!!!  Best feeling in the world.  I am pretty sure I texted everyone I knew.  Here are some pictures of the swag.


And lastly, the video.

Posted by Amy @ Diary of a Horse Obsessed Girl at 7:00 AM