We all have certain horse shows that we admire and wish we could compete at. Some of them seem more attainable than others, and this week for the Hunter Princess Blog Hop I’m asking what shows would you want to do if you had a nice enough horse, all the vacation time you needed and a big budget for traveling and coaching fees.

Easy peasy...INDOORS!!!  I would LOVE to ride at Harrisburg (PA National Horse Show).  I qualified for NAL Adult Jumper Finals twice in the past and passed on going due to the ginormous expense.  I have always regretted it.

I would also love to show at The Washington International Horse Show.  I used to go and watch it as a kid.  Who doesn't dream of showing there? 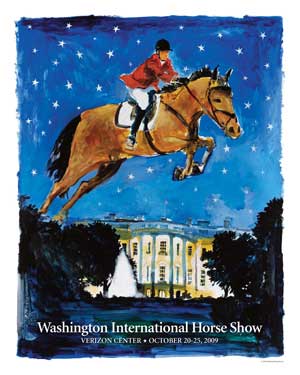 Too bad the National Horse Show moved from NY to KY.  That would have been awesome too.  People that I know that showed there said it was a nightmare.  Shipping in, walking the horses down the streets of NYC, then having schooling times in the middle of the night.  Totally worth it though!!
I also for some reason really want to show at The Hampton Classic.  Maybe to spot a celebrity.  I don't know, just one of the shows on my bucket list.
Posted by Amy @ Diary of a Horse Obsessed Girl at 8:46 PM