Well the first show with Poppy for the new show year is in the books!  I am late doing this post so this was an AA show December 20 & 21st.

I got there early on the 20th to unload, set up, and bathe Poppy.  We showed about noon so plenty of time to settle in.  I did just one class on Saturday, the High Adult Jumpers (1.10m). 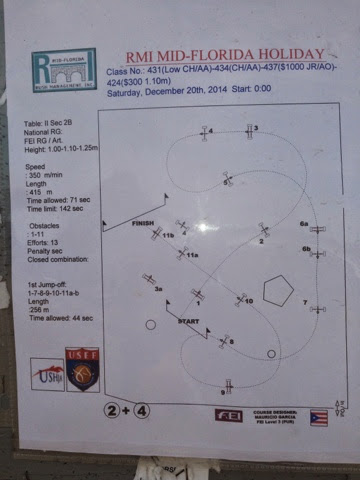 It was a pretty straight forward course.  The ring was big so it was important to be quick and not accrue time faults by getting sucked into "touring" the ring.  Poppy was VERY full of herself and did lots of leaping in the warm up ring.  She really just seemed happy to be there and showing.  I love that she loves her job.  We were clean in the first round.  My phone died so I only have a short clip of round 1.

In the jump off to jump 9 (an oxer) I pulled to a chip instead of kicking for a long distance and we had a rail.  We still came in 7th. 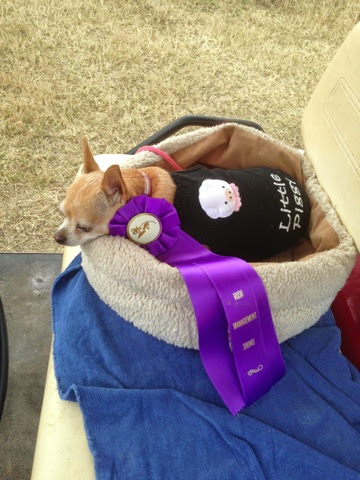 Mini Nugget makes a good ribbon model.
Sunday we just did the NAL Child Adult jumper Classic (1.10m).  I thought she would be tired from Saturday and a bit quieter but no.  She was leaping even more.  And rearing at the in gate.  The rearing seems to be our good luck charm though because she jumps clean when she rears at the in gate. 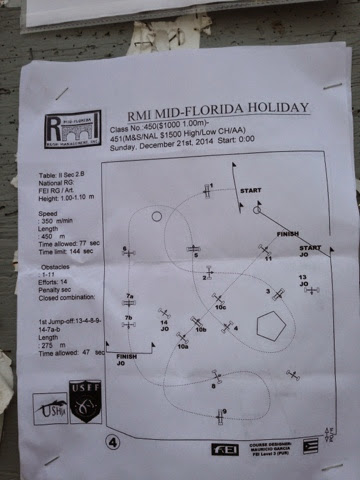 Again not too hard of a course although the roll back to the oxer at 9 caused some rails.  We were double clear.  In the jump off we were fast, did the inside turns, and were tidy.  We were 5th.  I was happy as Poppy did everything I asked and jumped superbly.  This also further strengthens my desire to move up a division.  It is scary how fast people run and take terrifying risks at 1.10m.  It's not worth it.  I would rather lose and be safe.  I don't mean to sound ungrateful, this is one of my frustrations with my division. 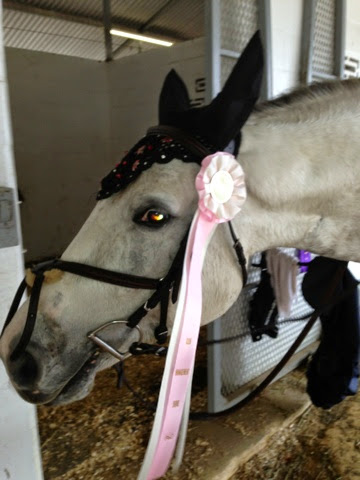 Shhhh don't tell Poppy we didn't win.  She was so proud of herself.  I love my little grey mare so much and love how hard she tries.  A great start to the new season!  Next up HITS!!
Posted by Amy @ Diary of a Horse Obsessed Girl at 2:39 PM