I should probably give you some background on my horses since they are the main characters here in my blog.

Poppy is a coming 8 year old grey Hanoverian mare. She is nicely bred. Her sire is Don Alfredo and is out of a mare named Eidelweiss by Aerobic. I bought her almost 2 years ago as a very green mare who was jumping cross rails and thought her job in life was to be a pasture puff so she would be naughty to get out of work with her owner. She is little is stature, standing about 15.3 however she has such a big jump in her you hardly notice. Her form over jumps is just beautiful. I just moved her up to the High Adult Jumpers (1.10/1.15m) a couple of months ago.
﻿﻿ Tank is a coming 15 year old QH/Paint. He is solid chestnut with a blaze and 3 socks. He stands at 16.2 and built like a powerhouse. He will crack your back over a decent sized oxer. I compete with him in the High Adult Jumpers (1.10/1.15m). I bought him about 6 years ago as a greenie who had a pension for bucking people off upon landing from the jumps. After some trial and error I found he HATES people laying on his neck. The boy likes a correct position, is that too much to ask?

﻿
My newest addition is Ketel. He is a coming 3 year old TB gelding. He is dark bay with just a small star. He stands at 16.1/16.2. and is still growing. I bought him March 2nd and he was 8 days out of race training at that point. He was sent down to Calder in Miami to learn to be a race horse and apparently was too slow so he went back home to Ocala. His sire is Graeme Hall and he is out of Scandals by Fortunate Prospect. What compelled me to buy him was not only his nice conformation but also his kind eye and demeanor. He is the old soul type and just sweet as can be. So far he is everything I hoped for so we will see what his future holds.
﻿ 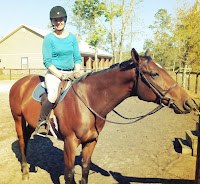 Hobbs. He is my 24 year old retired jumper. He is I think about 16.1 solid bay TB with lots of grey brought on by age. I bought him from my trainer when he was 12 and she bought him for her daughter when he was 7. He was just awesome in the High Adult Jumpers. He either won or lost trying to win. If he was clean not many could be faster. When I first bought him I fell off a lot because he turned so fast I couldn't keep up. You could never jump the same course twice because he remembered it and would go so fast and turn so tight it was just out of control. And he always celebrated after he complete a course with a victory gallop and a few leaps. This was not negotiable and I have no clue how he knew when a course was completed. He was such a competitor it has always baffled me why he never raced. He loved his job. When the buzzer sounded for the jump off you'd better hold on because he was off to win. He slept in his stall before his classes and when it was time to go he was ready. And sweet as can be. You can lead him by his forelock wherever you want. When he was 17 we had just completed several weeks of showing at Winter Series where he either won or came in 2nd when he got hurt in turn out. He played hard and he pulled something behind. We thought it was a suspensory but after treating that he still was lame. We continued to try and diagnose but never could figure it out and he was "broken bone lame" as one vet said. Eventually I gave up and retired him and he eventually became sound behind but he had nothing left to prove. He has earned it. It makes me tear up just talking about how great he was/is.
﻿﻿
Lastly and the least tallest is Cotton. He is my 4 year old miniature. He is a silver dapple that stands at about 30 inches. I bought him when he was 9 months old to babysit when I was away at shows. At the time I only had Tank and Hobbs and when I was away at shows with Tank, Hobbs would pace and scream. Now he just hangs out and pretty much does nothing.