What a week it has been!  I'm back and finally have time to post. Thursday morning Poppy, Mini Nugget, and I left for HITS. 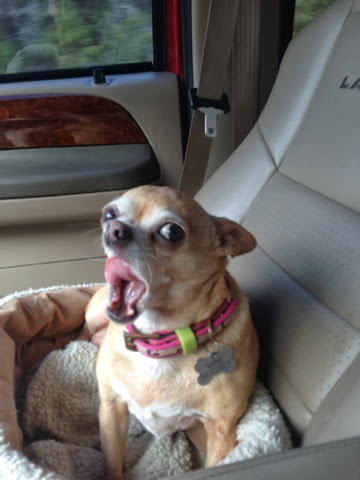 When I got there I unloaded, helped trainer N & M unload, then went to park my trailer.  That was a compete mess thanks to all the rain we have had.  It was early evening before I got a chance to get on Poppy.  Poppy is normally unflappable. She doesn't spook and is pretty level headed.  That is until she saw HITS.  She has been to the show grounds numerous times but now add thousands of people, horse, tents, motorized vehicles driving crazy, etc.  I took her for a walk around the track that surrounds some of the rings to let her take it all in.  We were almost to the jumper ring when she had her melt down.  I shit you not when I tell you a little girl on a white pony came galloping around the track and hit the puddles kicking and screaming "yeeehaw" and "woohoo!"  Poppy started standing up and when she came down she would start bucking.  I finally got her to the jumper warm up ring which was packed.  I hacked her around good but she never really settled. 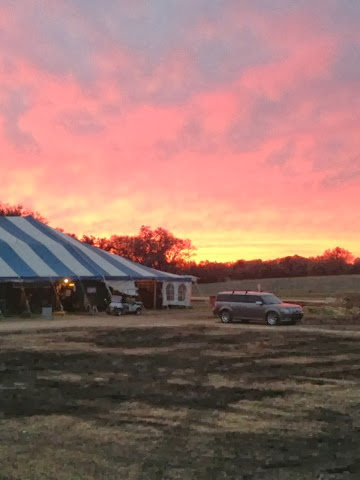 Friday we decided to go ahead and take her in the High Adult Jumpers.  We figured if my round didn't go well there would be a lower jumper class going on in one of the other rings.  Our round wasn't perfect but she was good and we had a fault free speed class.  Not fast enough for a ribbon though.  Afterward N had me and another client walk over to the new stadium.  It literally was over a mile away and across a road from the show grounds but it was spectacular. 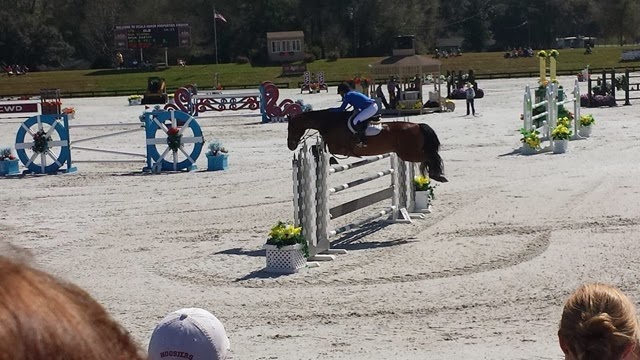 Saturday morning N wanted me on by 6:30am so I could walk Poppy down to the stadium.  They were letting the hunters school in there so I snuck in a hack with them.  It was also good to practice walking to the ring in the dark as we would be doing that night.  Late morning I did another High Adult class.  I discussed the jump off with N and we decided I would not do the jump off in order to save her for the classic that night.  Even without jumping off we still got a 6th place. 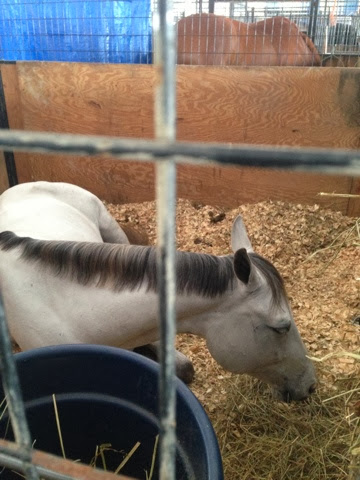 Finally order of go was posted and I was 29th to go in the classic.  Course walk was at 5:15pm and first horse was to be on course by 5:40pm.  Due to the large number of entries they decided to split the class and prize money.  Adults would go first then the children. 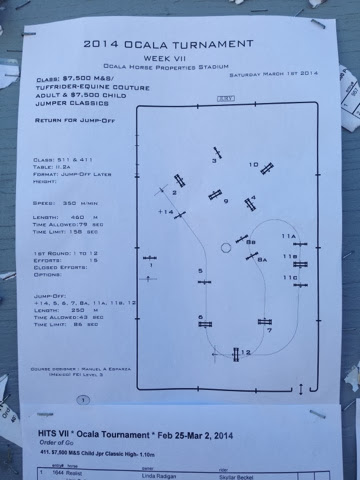 After the walk I watched 4 horses go (all went clear) then I headed back to the barn to get on.  My friend graciously volunteered to braid Poppy for me.  She looked amazing.  Forgive me for not having pictures or video.  We were hectic with having 3 riders in the classic so I forgot to give someone my phone to video.  I made the hike to the ring just in time to hurry and warm up.  She felt great, we went over our plan, and in the ring I went.  Well with N's help.  Poppy was a bit ornery and wouldn't go in.  Once in I knew she was on fire.  She gave a huge leap when I asked her to pick up the canter and we were off.  Jumps 1 to 2 was a going 8 stride so I had to ride it forward and strong.  Then a steady 6 strides to jump 3.  Jump 4 was an oxer then bending around the gazebo to an airy jump 5.  The horse before me stopped at it and the rider fell off.  I made sure to keep riding forward and confidently to jump 5 then 4 strides to 6. Jump 7 was a large wide oxer, 8 strides to a one stride.  Then jump 10 was a broken line to the triple combination and ending with a big oxer at the end of the ring.  We jumped clear and within the time allowed.  Poppy killed it.  I came out of the ring and N and I had to fight back tears.  I know, totally corny but 2.5 years ago this mare was barely broke.  We were so proud we couldn't help but be corny.  I had to wait until the end to go back in for the jump off.  15 riders ended up going clean and I was 11th in the order to return.  We went over our plan and I took a few warm up jumps.  N told me jump 14 to jump 5 was a long 6 strides and if I rode backward like I did over my practice jumps I wasn't going to make it.  I rode in bold and tried to angle it to a straight line and therefore shorter distance. Then when landing from jump 6 I had a tight inside turn to the big oxer at 7, 8 strides to 8a then a tight inside turn to 9 ab(they took out the c element) then a long gallop to 12.  I got a bit conservative to jump 7 and stayed out too long thus adding on time.  N says that's where I lost.  We were good enough for 10th place though.  I could not be more proud of my little grey mare. 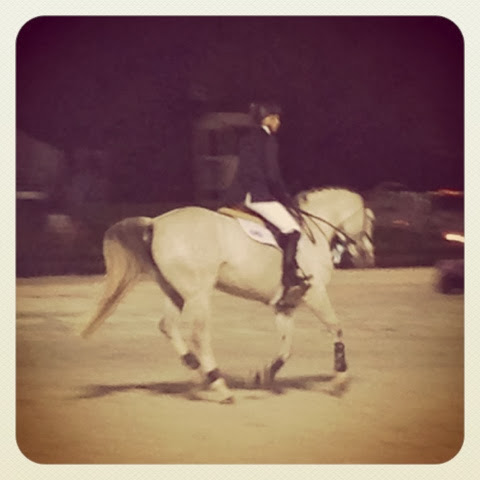