Last evening Luxxx had his second lesson with M.  It started with Luxxx refusing to get on the trailer.  He politely planted his feet and said "nope I'm just gonna stand here and stare at you."  Moving a large baby is impossible.  I got the chain lead to put over his nose to help encourage him.  The chain is my last resort with him but it always works.  On he went.
M threw the western saddle on him and he stood quietly.  He then went in the round pen for some lunging.  Luxxx was great.  Then he tied the feed bag on the saddle.  He tried to run from it again but eventually settled.  M also shook it and threw it over him a bunch. It is important to desensitize babies to everything.  Things happen, maybe you are mounting and they walk forward and you get dislodged.  You don't want the horse to get scared and bolt.  As many situations you can present to young horses the better.
M then had me work Luxxx lunging and teaching him commands.  He corrected me that I should only ask him to whoa once.  If he doesn't respond he works more.  Repeat until he listens the first time.
We then tied him to the pole and let him practice standing.  He was good.  M got on and off him a few times then it was my turn.  Woohoo I sat on Luxxx for the first time!  To be quite honest, I was uncomfortable.  I like to get on AFTER they are broke.
Luxxx was pretty sweaty so we decided try him on the wash rack.  I warned M that he is not used to being hosed.  As soon as M turned the hose on Luxxx panicked.  When he couldn't break free he really panicked.  His legs went out from under him and he rolled onto his back (still tied).  He flailed and rolled around more until he was calm enough that we could get him free.  Despite being completely terrified at this point we got him calm enough to hose him off. He has some scrapes in his legs.  It is hard to watch but I tell you most babies react this way.  Mike saidnhe has seen some worse, some better.  He has to learn running away is not an option and we are not going to hurt him.  M described him as "a big awkward ducking who doesn't know where his feet are."  He couldn't get out of his own way and just fell over.  Multiple times.  Not fun to watch...
I took baby home and cleaned his wounds and fed him.  I am sure he was exhausted.  The wounds are really just scrapes from the concrete and looked better this morning.  No swelling, I'm sure he will be fine. 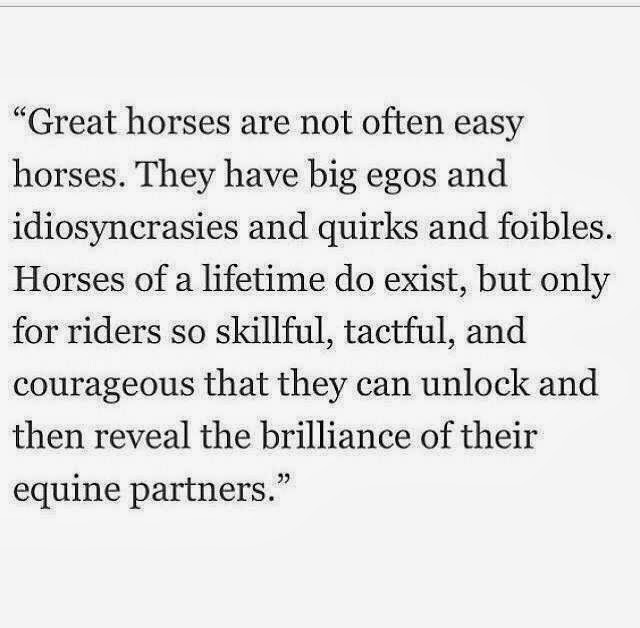 I forget who said this, maybe Mclain Ward?  The first time I saw it I instantly thought of Poppy.  Maybe Luxxx too...
Posted by Amy @ Diary of a Horse Obsessed Girl at 9:58 AM