I am 12 days from competing in our first AA show of the season with Poppy.  She is still overweight and quite fluffy.  I can't so much about the overweight part in 12 days but I am diligently trying to work her 5 days a week to improve her fitness (yay for new lights) and have cut back on her feed (which she is very unhappy about).  I may or may not have her clipped by the 20th.  I ordered new clipper blades last week so when they arrive I can technically start clipping.  I just don't want to.  I have seriously come to hate clipping.  I know someone that I can hire to clip her but I can't stomach paying someone $150 to do something I am perfectly capable of.  So we will see.  I might be showing my overweight and still very fuzzy pony in 12 days.
I rode Poppy most of last week and lunged Luxxx (still not comfortable riding him under the lights yet).  So Saturday I decided to do some course work/horse show prep with Poppy.  It was an unseasonable 80 degree day and she is pretty fuzzy so she got hot and tired fast.  So tires that when I approached a vertical And half halted she would trotted.  She also rubbed my liver pool vertical a few times.  she rarely touches a rail at home.  I called hubby over to come jack it up a few times.  She didn't touch it again.  I have next weekend left to do more course work and set the jumps a bit bigger.  We stayed at 3'6 except for the vertical hubby jacked up to about 4ft.
Next I got on Luxxx.  He was last ridden the weekend before and lunged in side reins during the week.  The side reins have been helpful though as he now reaches down into the bit without me asking.  Of course he is 3 so there are the brilliant moments which are quickly followed by the giraffe imitations too.  He bucked pretty good when I asked him to pick up the canter.  My instinct is always to pick their head up.  M taught me that with the babies just kick them on and they will level out.  I always put a buck strap on for moments like these and instead of grabbing his mouth I grabbed the buck strap and kicked.  Instead of touching his mouth I left the loose rein and by pushing him forward he leveled out and cantered on.  I can't brag enough about his canter.  It is seriously like butter.  It is normally really hard to keep him cantering but Saturday I got about 3 laps in before he even tried to break.  Progress!
Since it was so warm everyone got a bath.  I tried to get hubby to snap some photos of Luxxx.  He thinks taking pictures is dumb so this was the only photo that didn't have his finger in it. 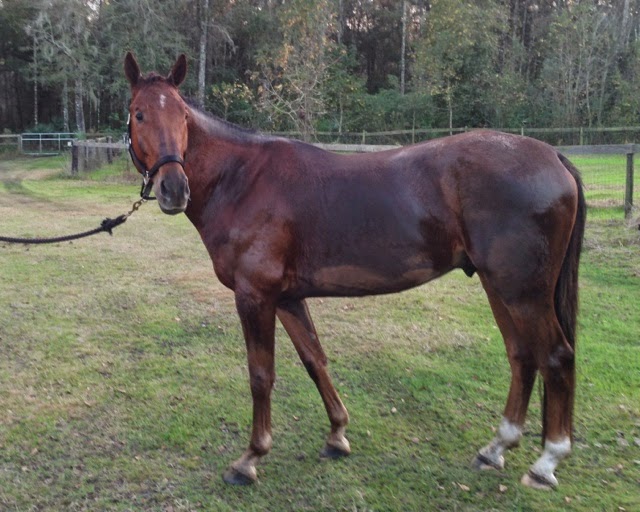 Still wet from the bath.  Sometimes it's better to take photos yourself 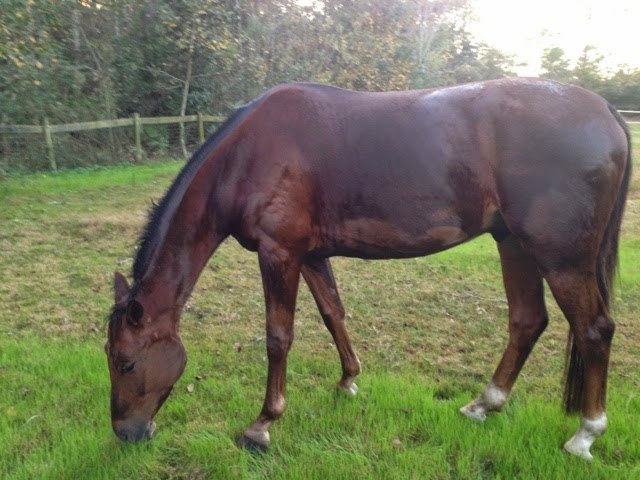