This week I have been focusing on Luxxx and spending time working him while Poppy gets time off after the show.  Monday was gross and raining so he just got a short lunge while the rain slowed to a drizzle.  Tuesday while lunging him he was practicing his Lipizzan stallion moves and pulled the lunge line from my hands. He was all woohoo I'm freeee!  Until the lunge line dragging between his legs proved to be terrifying and he ran for his life.  And ran.  And ran.  And ran some more until he was so tired he stopped and was like ok just eat me lunge line.  When I got to him he was sweaty and nervous.  I was weary about getting on and he wouldn't even stand still while I got on which is weird for him.  After walking for a lap he relaxed and went to work.  He is getting the idea of moving up into the bridle.  He actually worked really nicely for having a week off.  Then Wednesday he was really quiet on the lunge so I made it quick and got on.  He was super ADD.  He wasn't listening to me at all, was all over the place like a drunk driver, and did an awesome giraffe impression. So a drunk driving giraffe? 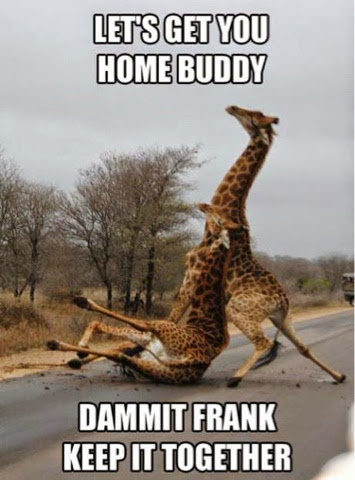 That's a pretty site... At the canter he kept scooting and just being what felt like the verge of a melt down.  Granted it was windy and about 15 degrees cooler than normal so that could be a contributing factor.  I didn't want to let him be done and I didn't want to continue to allow the drunk giraffe to drive me around so I got off and walked him out to the jump field.  He needs to get used to going out there. I even put one side of a vertical down and we walked over that a few times.  He also walked over a small barrel jump like no big deal so I let him be done. 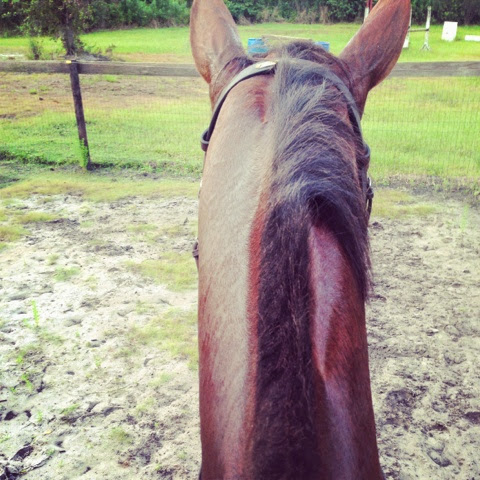 He continues to rub his mane :( I have heard mixing listerine and baby oil?  Anyone tried this?  How much of each?
I will probably hack Poppy tonight.  We will see if I have time to work with Luxxx at all.

I plan to continue my Horse Shows on a Budget series posts.  I don't like to edit posts after I post one so I added an edit at the bottom of yesterday's to clarify when I say horse show bill I mean the bill from the show office.  My post wasnt clear about that.  The costs of those local shows did not include hauling costs or training.
Some topics I will likely discuss in this series are:
- Differences in showing unrated versus rated shows
- Maybe something on owning a trailer? It seems people think this is cheaper than paying someone to haul their horse and I don't think people understand the costs of purchasing a vehicle, trailer, and all the maintenance involved.  Maybe this could help people decide if it's worth it  to them to purchase one.
- Are there any topics you would like me to cover?
Posted by Amy @ Diary of a Horse Obsessed Girl at 9:40 AM