Ups, Downs, and Back Up and Down Again

It was a busy 3 day weekend so I had little time to write anything.  Friday I rode Tank and he was a good boy.  I am getting the idea that on the web if you don't share pictures it didn't happen.  I was by myself so this is really the best I can do. 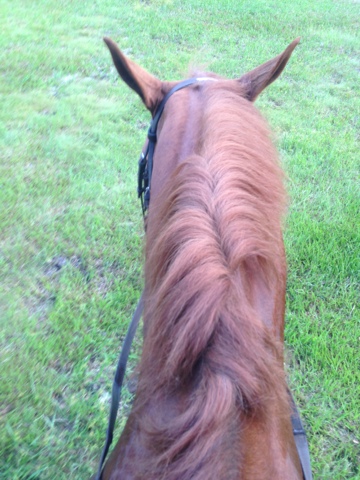 We had plans all day Saturday and Sunday so I didn't get to ride.  Saturday I got to see my friend's new project who is a 3 year old TB/WB cross.  He keeps telling me to give him 7 months on her and she will be my next horse.  I look forward to seeing her progress.  My friend does a great job bringing up the babies.  Poppy was sent to him for 30 days of training which is how I found her.

I am on a mission to keep my horses feet in good shape after we have had such wet weather so I make sure I clean all the horses' feet every morning and treat with Koppertox.  That stuff is like smelly green gold.  Anyway, on Monday Tank came in with his hind right shoe shifted.  No biggie, I am friends with my farrier and he is really good about coming over when I need him.  He said he would be by that afternoon.

So Monday afternoon I dropped my baby Ketel off at camp.  He is going to spend a week with my trainer.  I was bad and didn't get any pictures.  He loaded in the trailer like a good boy but did not ride well.  He pawed and raised a ruckus the whole ride.  When I got there he had a cut on his head, was covered in foam and sweat, and was shaking.  It was a smooth 35 minute ride there so I don't know if the poor guy was scared he was going back to the track or what.  I got him settled in and then spoke to my farrier who said Tank was missing a hind shoe.  Apparently while I was gone he pulled that crooked shoe off as well as half of his foot.  And the farrier said he was lame.  UHG!

I found the shoe, packed his ouchy feet and wrapped them and he already walked sound.  So farrier tacked it back on today.  I didn't check to see if he trotted sound.  I figure I will give him a couple of days, he really did a number on it.


The dentist will be at my trainer's barn while Ketel is there so he will get his teeth floated.  He is scheduled to get scoped on Friday.  This afternoon my trainer got on him and she said he was bratty and tried to buck and rear.  She got him through it and pointed out his behavior was nothing compared to Poppy when I first got her.  He worked through his brattiness and was good EXCEPT she felt he was weak behind and "stabby."  UHG!  I can't get away from work the next couple of days to go see him.  I am thinking he maybe is sore from his antics on the trailer.  We will see how he is tomorrow and go from there.
Posted by Amy @ Diary of a Horse Obsessed Girl at 11:03 PM